Note: This is part of a continuing series (see the Big Picture Category on this blog) wherein we introduced an overview graphic intended to capture the essence of enterprise agility in a single slide. In a series of continuing posts, we have been working our way from the bottom (stories, iterations and the like) to the top where the enterprise vision and portfolio management resides. This post is one in a miniseries describing the last big icon on the upper left – Agile Portfolio Management. 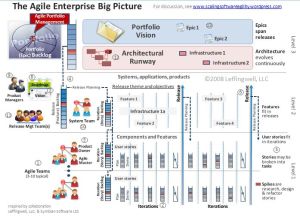 In the last Big Picture Post, we introduced the portfolio, along with the challenges that agile teams are likely to find as the impact of their new and more productive models wends its way to the Project Management Office (PMO), which in some cases can be the “mother ship of potential agile impediments.” We also introduced the excellent DTE energy case study: Establishing an Agile Portfolio to Align IT Investments with Business Needs. This case study is an example of how an agile enterprise can first recognize, and then successfully address the significant changes necessary to allow the emergence of true enterprise agility benefits.

Since that post, I’ve been thinking that I would expound on the legacy mindsets that called out in the case study. But I’ve decided I can’t. They are just too well done and so symptomatic that I decided just to repeat them here. However, the accompanying descriptions and paraphrasing are my own. These are based on my own experience from two perspectives; 1) then, as an executive, managing portfolios and carrying some elements of these mindsets, and 2) now, as an agile executive attempting to change those very same mindsets!

The legacy mindsets called out in the DTC case study are:

Perhaps it’s obvious from my elaborations that I tend to get somewhat passionate about this topic. Perhaps it’s because my guilt shows through. Surely, I have been on the other side of this fence before iterative and incremental, and now agile, development methods proved their extraordinary worth. So, I know as well as any that if these legacy mindsets are not addressed, they will kill the agile enterprise initiative as surely as a fixed content/fixed schedule 60 hr/week death march.

Here’s why. The table below shows the manifestation of these problems in practice (as described by DTE along with a few of my own) and the real problems they create for the nascent agile teams.

You’ll probably recognize many of these mindsets, manifestations and the problems they create for the development teams. Many enterprises do. In one recent presentation I made highlighting the DTE case study, one PMO executive said “just delete DTE and put in [our company name here] and there you have it”!

Well enough crabbing and I’m sorry if I offended anybody. I just thought it important to walk through this pain field one last time, making sure we understand the problem so that the imperative for a solution is really, really apparent.

In the next post in this series, I promise to move to a more productive and proactive set of ideas to address these problems. One giant step further to actually becoming the agile enterprise.