In a recent post, A Lean, Scalable Requirements Information Model for the Agile Enterprise, we introduced the requirements information model that underlies the requirements-related elements of the Big Picture series. While presenting the model in UML form may seem a bit of a geek fest, it’s the best way to describe the model in relatively unambiguous terms. In a follow on post, we described What’s Lean and Scalable about the Model and promised to later describe the model from the perspective of Agile Project Teams, Agile Programs and the Agile Enterprise. In this post, we’ll describe the model as it applies to Agile Project Teams.

But first, here’s a look at the requirements meta-model. 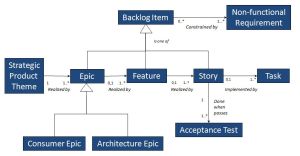 The Model Subset for Agile Teams

In the Big Picture series, the Agile Project Team (Agile Team for short) is highlighted below:

Agile Teams in the Big Picture

The critical role of the Agile Team itself within the agile enterprise has already been described in this post.

In accordance with the lean and scalable principles from the last post, it is a) the simplest thing that could possibly support the needs of all stakeholders and b)  particularly sensitive to the needs of the team members, in that the Agile Team is concerned with only a small subset of the requirements model. Moreover, that subset is quintessentially agile in that the artifacts described are consistent with most agile training (at least Scrum and XP) as well as common practice. (In other words, it isn’t mucked up with administrative overhead, manual traceability, reporting, detailed requirements-cram down, or any of the other ways enterprises can unnecessarily burden the teams!).

The elements of the model that the teams base their work on are extracted from the model and illustrated below: 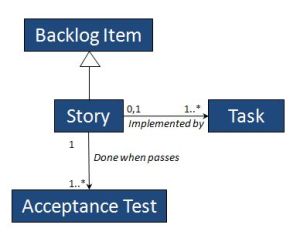 Since most of the work (90-95%) involved with delivering enterprise software in an agile manner is done by these teams, using only these simple artifacts and relationships, it’s worth the effort to define these items and relationships more explicitly. We’ll do that in the following sections.

First, we note that Story, pictured in the center, is a “kind of” Backlog Item. (The triangle indicator connecting Story to Backlog item is the UML generalization relationship, indicating that the thing the arrow points to is a generalization of the special case of the pointing thing. In other words, in this case, Story is a special kind of Backlog Item. This also implies that there are other kinds of backlog items as well).

The term Backlog was first introduced by Scrum where it was described as Product Backlog. In our enterprise model, Product can be a pretty nebulous thing as teams may be working on APIs, subsystems or whatever so there are multiple types of backlogs in the Big Picture. Therefore, our use of the term Backlog is more generalized than in Scrum. In the Big Picture, we described the particular backlog we are talking about here as the Iteration (Story) Backlog as can be seen below.

This Backlog is the one and only, definitive, source of work for the team. In this case, this particular Backlog (Iteration (Story) Backlog) holds all the work items (represented as Stories) that the team has identified. It is local to them. It is their repository for all identified work items and the contents are typically of little concern to others in the enterprise. This is a workflow “separation of concerns” which provides the team with a local work sandbox. They manage it, tool it and put things in and out of it as it suits their needs in meeting their iteration objectives. If “a thing to do” is in there, it is likely to happen. If it isn’t, then it won’t.

The team’s Iteration (Story) Backlog consists of all the work items the team has identified. In the meta-model, we call these work items Stories because that’s what most agile teams call them. (Strictly speaking, “work items” is probably a better term, but we aren’t trying to fight agile gravity with this meta-model!) So for our purposes, we’ll define Story simply as

A Story is a work item contained in the team’s iteration backlog.

While that definition is simple, it belies the underlying strength of agile in that it is the User Story that delivers all the value to the user in the agile model. Indeed, the user story is inseparable from agile’s goal of insane focus on value delivery. In the meta-model so far, the User Story is not explicitly called out, but rather is implied (as a shorthand) by the Story class.

To make the User Story explicit, we need to extend the simple model a little as seen below:

With this small addition, we now see that the backlog is composed (primarily) of User Stories and anything that isn’t a User Story is an Other
Work Item. Other Work Items include things like refactors, defects, support and maintenance, infrastructure and team overhead. We’ll discuss the rationale for calling out these Other Work Items specifically later, but for now they appear primarily to help the team’s better estimate the time they actually have to deliver User Stories.

I’ve described the User Story briefly in the post Enterprise Agility–The Big Picture (5): User Stories and the Iteration Backlog, but since this key construct does most of the work in the agile model, it’s worth investing some more words here.

User Stories are the agile replacement for what has been traditionally expressed as software requirements statements or Use Cases and they are the true workhorse of agile development. Developed initially within the constructs of Extreme Programming, they are now endemic to agile development in general and are taught in most Certified Scrum classes as well. In our model, we’ll define a User Story as:

A User Story is a brief statement of intent which describes something the system needs to do for the user.

As commonly taught (at least in the last few CSM Scrum courses I have seen), the user story takes a canonical (standard) form of:

As a <role> I can <activity> so that <business value>

(Note: While searching for the origin of this nifty form, I received the following email from Mike Cohn ” It started with a team at Connextra in London in 2003 and was mentioned at XP2003. I started using it then and wrote about it in my user stories book that came out in 2004″.  Thanks, Mike.)

In this form, User Stories can be seen to incorporate both elements of the problem space (the business value delivered) and the solution space (the activity that the user does with the system). For example: “As a Salesperson, (<role>) I want to paginate my leads when I send mass emails (<what I do with the system>) so that I can quickly select a large number of leads (<business value I receive)”.

LOTS has been written on applying User Stories in agile development. The good news is that it is now so common that I don’t have to elaborate further here, as that is not the intent of this post nor the meta-model. For that, I refer you to the many books on Extreme Programming and User Stories.

Ron Jeffries, one of the creators of XP, described what has become my favorite way to think about User Stories. He used the neat alliteration, Card, Conversation and Confirmation to describe the three elements of a User Story. Where:

Note: In XP and agile, stories are often written manually on physical index cards. More typically in the enterprise, the “card” elements is captured as text and attachments in agile project management tooling, but teams often still use cards for early planning and brainstorming.

With this simple alliteration and XPs zealousness for “all code is tested code” we have an object lesson in how quality is achieved during, rather than after, actual code development.

Relative to our model, however, we have represented the Acceptance Test as an artifact distinct from the (User) Story itself as seen below:

There are many reasons why we did this, which I won’t belabor here, but in any case the model is explicit in its insistence on the relationship between the Story and Acceptance Test as follows:

In this manner, the model explicitly supports the agile “all code is tested code” quality mantra. Every User Story has at least one Acceptance Test which must be passed before the Story can be considered to be done. Very direct. Very explicit. Very cool.

And finally, we find our way to the Task model element:

As you can now infer from the graphic, stories are implemented by Tasks. Tasks are the lowest granularity in the model and represent specific work items to be performed by specific team members to accomplish the story. In our context the definition of a Task is:

A Task is a small work item, either stand alone, or necessary for the completion of a Story

Tasks have an owner (the person who is going to do the task) and are estimated in hours. The burn down of task hours represents one form of iteration status. As implied by the 1-to-many relationship expressed in the model, there is often more than one task necessary to deliver even a small story. For example:

In other cases, it’s common to see a mini-lifecycle coded into the Tasks of a Story. For example:

In most cases, Tasks are “children” to their associated Story. However, for simplicity, our model also supports stand alone Tasks. With this construct, a team need not create a Story simply to parent such an item as “order 8 Gig more memory for the new file server”.

Well, that’s it for our description of the meta-model as intended to be used by Agile Project Teams. In an upcoming post, we’ll look a little higher in both the Agile Requirements Information Model and the subject organization and describe how to apply the model to Agile Programs.