I’ll be delivering only one more public course of Scaling Software Agility: Best Practices for Large Enterprises yet this year. It will be held at Agile University in Boulder, Colorado November 13, 2008. You can see the abstract and register for the course here. While the course is based on the book, the material is constantly updated based on my ongoing experiences helping some of the world’s larger software companies transform themselves to become an agile enterprise.

In addition to the delivered content, the small group setting provides an opportunity for informal discussions of some of the real world challenges that attendees face. And since most attendees face significant challenges of agile adoption at scale, the shared learning environment facilitates experience sharing and practical problem solving in the enterprise context.

Hope to see you there.

Note: In the post Enterprise Agility: The Big Picture, we introduced an overview graphic intended to capture the essence of enterprise agility in a single slide. In a series of continuing posts, too numerous to highlight here (see the Big Picture Category on this blog for an orderly summary)we have been gradually working our way from the bottom (stories, iterations and the like) towards the top from where the enterprise vision originates. In this post, we’ll briefly discuss the Epics that drive so much of the behavior of the agile teams at Level 1 and 2.

In an earlier post, we took the liberty of putting labels on the different types of system behaviors (stories, features, epics) that drive our hierarchical, Big Picture model. 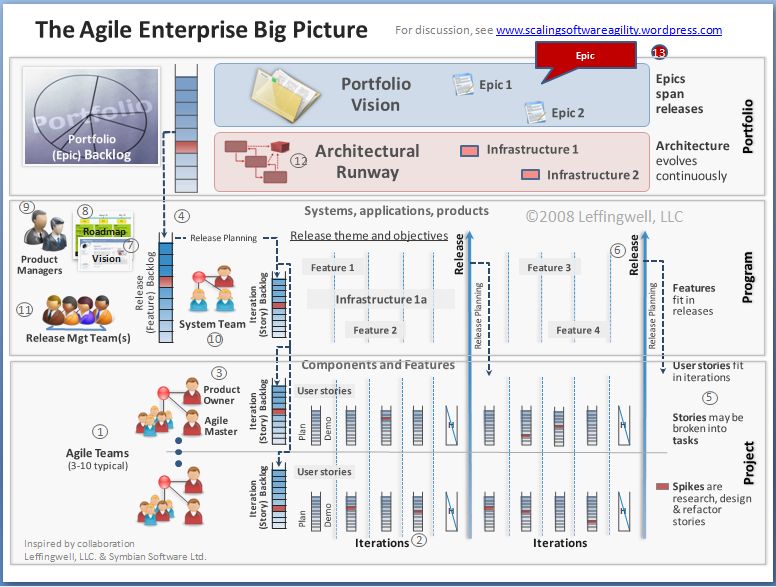 I also took care to note that there is no “UML for describing agile things” so I’ve simply tried to apply usage models that appear to be fairly common, providing us with at least a tentative language to describe what we are trying to describe. In so doing, I picked the word “Feature” to represent things much bigger than a User Story as this is mostly consistent with other agile uses of the term including Feature-Driven Development and the organization of delivery models based on the agile feature teams construct. It is also consistent with the language we used to describe such system services in earlier software requirements texts, including my own – “a feature is a service provided by the system that fulfills a user need”- (Managing Software Requirements: A Use-Case Approach, Addison-Wesley, 2003).

Sizing of Features and Stories

When it comes to sizing, we sized User Stories arbitrarily so as to fit in an iteration (leaving no dangling participles of work at the end of the iteration). This is standard agile practice and is a point of agreement in the various methods. For the Feature, we simply expanded the paradigm to this larger service class and again forced Features to be sized arbitrarily to fit inside an Internal or External Release boundary. This helps assure that teams focus on larger-scale value delivery while again, not leaving the user hanging with an incomplete, non-holistic chunk of functionality. In addition, this forces Product Owners and Product Managers into the same incremental thinking (what’s the simplest thing that can possibly work for the user to fulfill that need, and how soon can we deliver it….?) that agile teams use (with XP being the most extreme case of incremental-ism). Indeed this one-piece-of-user-value-at-a-time is the most basic construct of agility at the team level and we build on it continuously to create the agile enterprise.

As we reach the top of the pyramid, however, and discuss the highest class of user benefit, the Epic, there is no need to force arbitrary sizing as these are portfolio vision items that take multiple releases to deliver. Indeed, some epics take years to deliver, even in agile enterprises. For example, the Epics such as “video streaming” and “integrated on-line music stores” will likely consume hundreds of person years for mobile phone manufacturers and will be delivered in stages over a number of years.

The question that arises is “given their large scope and size, even if prioritized how would we know when we will deliver what”? The answer has to come from the Portfolio Management function (represented by the Portfolio icon on the left). There the decisions are made on a relative investment basis based on the business case for the Epic. In other words, enterprises decide what percentage of the total resources they want to invest in an Epic to achieve the ROI of the business case. Given that data, teams can decide at Release Planning time, (where they divide the Epic into Features that deliver user value) what percentage of their resources they can assign to the Epic. With resources as a given, the highest priority Features for the Epic are delivered first, gated only by the resources available. Then Release by Release, the Epic makes its way to market in Feature-size chunks, with reprioritization occurring at every Release Planning boundary.

In this Epic post (sorryJ), we’ve introduced the Epic container as the vehicle to describe the major initiatives that we need to deliver to the market. In so doing however, we’ve left at least one stone unturned, which is how Epics can be sized and estimated (assuming that they can be). We’ll discuss that in the next post.

Along with Kent Beck, Stacia Broderick and many others, I’ll be speaking at the Voices that Matter: Crafting Software Conference to be held in San Francisco, December 1-4, 2008 in San Francisco.

“The Pearson Education Voices That Matter Conference series gives voice to the most important thought leaders in technology, design, and business today. These conferences give our readers access to those who have devised new technologies, new approaches and new inventions. Our speakers are the individuals who have made the strongest contributions impacting their industry. They are highly visible practitioners and luminaries who lead the way, spawn new technologies and inspire passionate communities.”

If you register via clicking the picture above and use the Priority Code CSNPKRA, you’ll receive a special discount with your registration.

Hope to see you there.

Last week, I gave a talk on Scaling Agility at Agilis 2008 in Reykjavik, Iceland. Yes, Iceland has an active agile community within their population of some 300,000-400,000. A local consultancy Sprettur, hosted this conference and invited guest speakers including Jeff Sutherland and myself. I was somewhat surprised to see the advanced level of agile adoption in this community and I had the opportunity to meet a number of agile masters who were in the process of implementing and expanding agile and Scrum.

Jeff gave two separate talks on Scrum which I enjoyed immensely. It was a learning experience for me to be able to benefit from the depth and breadth of understanding that this co-inventor of Scrum possesses. In one talk entitled “Your money for nothing and your change for free” he mentioned, almost in passing, that as a former fighter pilot, one always had to know the emergency landing procedures that came into play while attempting to land a jet on an aircraft carrier. He used that analogy to remind teams that they needed instant recall of their Sprint Emergency Landing Procedure of they ever saw this shape to their burn down chart: 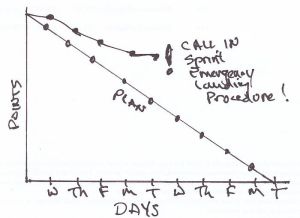 When this is the case, the teams should immediately fall back on its four-step emergency procedure:

In a prior post, I referred to a post by Paul Beavers of BMC (Is it Possible to be Half-Agile?) which gave his perspective on the agile acid test- the quintessential test of whether or not an organization is truly achieving agility at enterprise scale. In my post, I also provided my viewpoint on the subject. Recently, I tested that viewpoint with a few others. As a result, I’ve modified my version a bit as you see in the graphic below:

As amended, the three elements of my version of the Agile Enterprise Acid Test are now:

Note: Readers may also want to note Jon Strickler’s view on this definition, perhaps from a somehwat “leaner” perspective, in the comments on this post below.

I just finished reading this recently published book by Michele Sliger and Stacia Broderick (both of whom I’ve had the pleasure of working with in the field). This book fills a critical agile enterprise gap – that is how to transition from traditional project management to agile project management. Michele and Stacia, two long-time (neither will say how long….), certified project management professionals, describe how project managers can successfully transition to agile by “refocusing on facilitation and collaboration rather than command and control”.

For those with traditional project management training, Chapter 2 provides a framework for mapping the PMBOK (the Project Management Institutes Guide- Project Manager’s Body Of Knowledge) to agile techniques. The book is a unique perspective from two project management professionals who have been-there-and-done that and are now dedicated, over-the-top agilists (I mean that as a compliment). If you ever find yourself using any four or more of the following things – PMI, XP, PMBOK, Gantt, WBS, Scrum, PMP, PMO – in a single sentence, this is the book for you!

Recently I’ve again been pondering the balancing act of implementing new agile practices alongside extremely well entrenched, existing enterprise practices. While it’s always fun to criticize our past behaviors from the perspective of the rear view mirror, it’s also the fact that most of these prior practices actually worked dang pretty well pre-agile. After all, as most every software enterprise is by definition, successful prior to agile (or they wouldn’t have gotten as big as they have!), a healthy respect for what-it-is-that-got-us-here is an element of agile wisdom. And yet, if we don’t address many of these legacy practices and mindsets, we will not receive the full benefit of the new model.

So we are constantly faced with the dilemma of “how much to change” and “how fast to try to change it.” Too much and we risk the entire initiative as the organizations antibodies set in; too little and the benefits will be mitigated.

In thinking about a current project, I remembered that Israel Gat, BMC VP, discussed just this issue in a post entitled the Equipoise of Agile. It is located at the Agile Thinkers Blog, but it isn’t a stand-alone post so you’ll need to scroll down a way to find it. Here’s the intro:

Equipoise is the equilibrium formed by offsetting conflicting forces. The equipoise of Agile is the skill of an Agile leader to orchestrate conflicting forces and pressures in and around Agile in a manner that utilizes Agile principles, without denying the realities of the non-Agile world. It is the ability to function and get teams to function amid contrast and ambivalence that are systemic. – Israel Gat

It bends your mind a little bit to be able to intentionally operate with conflicting belief systems, at least for a transformation period, but I’m convinced that is the right mind set with which to approach the enterprise transformation. Patience helps too.